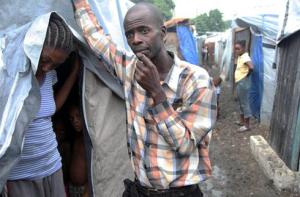 Joel Sainton, 38-year-old itinerant minister in Haiti, pastors a small group of people living with HIV/AIDS.  “Services” are held on the landing outside the one-room apartment he shares with his sister.

Joel’s journey to this pastoral role began in 2003 when, a year and a half after his wedding, Sainton’s wife tested positive for HIV. He soon tested positive himself, something that shocked him greatly.  Sainton, a church leader training to become a pastor of a congregation, was told by his church leaders at the time to give his wife back to her parents.  He refuse telling them he was married for life.  They replied that God had directly told him to put his wife out of his house.  Upon his repeated refusals he was removed from leadership.

Eventually his wife left him.  Isolated and lonely, Joel went on to form the Association of People Infected and Affected by HIV/AIDS (APIA).  He felt a need to help Christians and others suffering from the disease.

An article in USA Today on Joel recounts this story:  “Once, he says, he asked God why he had been given such burdens to bear. ” ‘You gave me the ability to talk to others, how can you let me get caught in that trap? Tell me what I have done that made this thing happen.’ And God answered me, ‘Did Job sin?’ ” — a reference to the pious biblical figure who loses his health, his wealth and his children. “He wanted to show me that he needed Job to accomplish the mission. So I came to understand that I had a mission.”   (Watch this amazing video about this Joel’s journey.  It is from of all places, USA Today.  http://bcove.me/77ks8iaw)

It has been said, sometimes lightning strikes the tallest tree.  Job was certainly the Redwood of his day.  God singled him out in a conversation with the Devil and Job’s life was never again the same.  And yet even today Job’s story is a source of strength for many… including a poor Haitian pastor with AIDS.

Did 2010 knock you around a bit?  It may be time to sift through those ashes and find the makings of a new ministry.

(Read the entire USA Today article in my “Around the Web” tab. )