1 John 3:16 – This how we know what love is.  Jesus Christ laid down his life for us.  And we ought to lay down our lives for our  brothers.

I recently read a blog on-line with an interesting title:  Why Free is Too Expensive (http://www.lisalarter.com/uncategorized/why-free-is-too-expensive/)  The premise was that, although giving of your time and expertise is nice… when you put a “free” price tag on it, it tends to become de-valued in the eyes of others.  She uses the example of offering some free business consulting to a friend who ended up canceling at the last minute because she was having a hectic day.  Because her services were being offered for free, it was easier to cancel… forgetting of course all the schedule shuffling and planning that went into the time they were going to share together.

Sometimes I think we devalue what Christ did for us by emphasizing how “free” it is.  Of course there is nothing we can do to earn salvation, it is the free gift of God, but it did cost something.  Jesus laid down his life for us.

And how about the love that you show to others?  Does it cost you anything?   We can’t escape the second part of that verse:  “We also ought to lay down our lives for our brothers.” 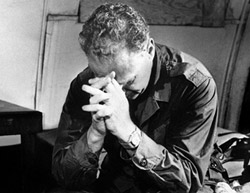 Lee Strobel shares the story of Bob Pierce, the founder of World Vision, the international Christian relief agency:  “Bob Pierce had advanced leukemia, but he went to visit a colleague in Indonesia before he died.  As they were walking through a small village, they came upon a young girl lying on a bamboo mat next to a river.  She was dying of cancer and had only a short time to live.  Bob was indignant.  He demanded to know why she wasn’t in a clinic.  But his friend explained that she was from the jungle and wished to spend her last days next to the river, where it was cool and familiar.

As Bob gazed at her, he felt such compassion that he got down on his knees in the mud, took her hand, and began stroking it.  Although she didn’t understand him, he prayed for her.  Afterward she looked up and said something.  “What did she say?”  Bob asked his friend.  His friend replied, “She said, ‘If I could only sleep again, if I could only sleep again.”  It seemed that her pain was too great to allow her the relief of rest.

Bob began to weep.  Then he reached into his pocket and took out his own sleeping pills, the ones the doctor had given him because the pain from his leukemia was too great for him to sleep at night.  He handed the bottle to his friend.  “You make sure this young lady gets a good night’s sleep,” he said, “as long as these pills last.”

Bob was ten days away from where he could get his prescription refilled.  That meant ten painful and restless nights.  That day his servanthood cost him greatly.  But even in the midst of his suffering, God infused him with a supernatural sense of satisfaction that he had done the right thing.”  (God’s Outrageous Claims, pp. 113-114.)

The love we give to others should have, as its model, the love we have received by Christ.  It should be given freely… but it shouldn’t be free… it has to cost us something.