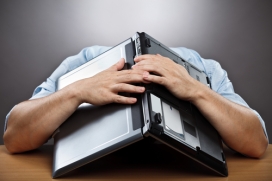 Michael Leamons in Reader’s Digest wrote the following for their “All in a Day’s Work” column:  “Although desperate to find work, I passed on a job I found on an employment website. It was for a waste water plant operator. Among the job requirements: “Must be able to swim.”(February 2000, p. 48.)

Some jobs are certainly more appealing than others.  Some may lead to future rewarding careers but others seem to keep us up to our necks in… waste water.

Last week we looked at two major decisions that Jacob made without the benefit of prayer:  marriage and career.  The first decision led him into matrimony with two jealous wives who used children in a game of one-up-man-ship for their husband’s affection.   The decision we look at this week is the decision regarding career which led Jacob into a dead end job with his scrupulous boss and father-in-law, Laban.  Lack of prayer landed him in a mess!  What can he do now?

Despite the less than ideal working conditions… chapter 30 reveals that Jacob still managed to prosper.

So the man became exceedingly prosperous, and had large flocks and female and male servants and camels and donkeys.  (30:43)

The short of it is this: there is still grace to be found… even marking time in a dead end job.

Many years ago I worked in Cincinnati, OH at a small food distributor that has since gone out of business.   I paid the bills for this company on an antiquated computer system in an office of crazies.   One women oozed bitterness to everyone.  Another swore like a sailor.  Another made train noises while she worked because it helped her think.  (I am not making this up.)  I was making a meager living but not very happy and not at that time pursuing my calling in ministry.  I was miserable.

Sometimes you are in a bad position by others or your own missteps, but just as Jacob learned to prosper even while getting the short end of the stick… you too can discover that God hasn’t lost track of His long term plan for your life.  My stint at the food distributor was part of God’s larger plan for me.  Little by little I learned to make the most of it.  I wrote songs on my lunch hour and on the way to the mailbox… which I later recorded onto an album.  This job also gave me enough there to get my family back on track financially.  And I made a few lifelong friends through the whole process.

Stop looking at your current job situation as a life sentence in a dingy cell.  Trace the source of sunlight through the bars.  Hope exists even where you are.  Ask:  “What blessings might God be trying to get me to notice here?”   Know that God can redeem your work and that your job site could become an altar upon which to better worship Him.

Greg Laurie remarks:  “Maybe you are at such a place in your life right now. You are laboring in obscurity. You feel as if no one notices what you do. Follow the example of Joseph: Work hard. Flip every burger for the glory of God. Create every PowerPoint presentation as though Jesus Christ Himself were going to inspect it. Hammer every nail as though you were building that house for God. Type every letter as if Jesus Himself were going to read it. Play every chord with skill and precision as if Jesus were listening. Because he is. Whatever it is you are doing, do it well. Be faithful—even if there are consequences.”  (Losers and Winners, Saints and Sinners, pp. 165-166.)

Author A. W. Tozer notes:  “It is not what a man does that determines whether his work is sacred or secular, it is why he does it.”   Maybe that’s what God wants to speak into your life regarding your job:  THIS is where I can bless you now.  There may be other opportunities sometime later… but for now… THIS is where you are planted.   Examine where I have put the blooms onto your branches!

You who are caught in decisions of love and vocation. In the name of God stop and look at what you have.  It may be more than you think.

What blessings are you finding around the job site these days?  Are you sharing these things with a spouse or close friend?

3 thoughts on “Stuck in a Dead End Job (or Planted There?)”