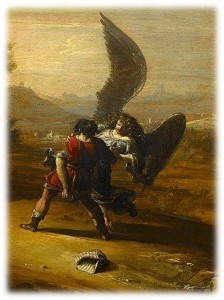 Have you ever experienced a “water shed” moment in your life? An invisible line in your walk with the Lord, that after crossing, you were never the same again.   It usually comes out of a stirring from the Lord… sometimes at the heels of a time of questioning.

For some of us, it came at the moment of conversion. We had thought that there was no way we could ever believe in Christ, but the questions nagged us so long, that we came to faith in Him.  For others of us believing seemed to be as natural as breathing… we were baptized at age 9, and have always taken part in church life. But then a crisis hits our life and we were rocked to the foundations of our beliefs. And we arrive at the watershed.

In today’s story, Jacob has come to this decisive moment. God wants him to return to the land… but he will not come back there as the same person he was when he left. His moment of decision is at hand.

22 Now he arose that same night and took his two wives and his two maids and his eleven children, and crossed the ford of the Jabbok. 23 He took them and sent them across the stream. And he sent across whatever he had.

24 Then Jacob was left alone, and a man wrestled with him until daybreak. 25 When he saw that he had not prevailed against him, he touched the socket of his thigh; so the socket of Jacob’s thigh was dislocated while he wrestled with him. 26 Then he said, “Let me go, for the dawn is breaking.” But he said, “I will not let you go unless you bless me.” 27 So he said to him, “What is your name?” And he said, “Jacob.” 28 He said, “Your name shall no longer be Jacob, but Israel; for you have striven with God and with men and have prevailed.” 29 Then Jacob asked him and said, “Please tell me your name.” But he said, “Why is it that you ask my name?” And he blessed him there. 30 So Jacob named the place Peniel, for he said, “I have seen God face to face, yet my life has been preserved.”

Now Jacob has finally put everything in his life on a slow trail to his brother as a “gift” and is now alone in the camp. But then he realizes suddenly that he is not alone. Startled by this stranger, Jacob springs into action… he struggles for his life until daybreak.

There is a triple word play going on here in the Hebrew. The Hebrew for wrestled (ye’abeq) is similar in sound to Jacob (ya’aquob) and Jabbock (yabboq) – the place this wrestling match takes place.  The triple word play is there to mark the importance of this pivotal moment in Jacob’s life.

Have you ever been lost? Jacob is. He might fancy himself as being “Off the Trail.” But he is really lost.  When will we ever come to admit that… we’re lost… lost and feeling all alone? But then, why is it, right at the moment when we realize this… we face a struggle that we “don’t really need right now?”

Sometimes our Jabbock comes at mid-life. Sometimes it comes on that centennial celebrations of 40, -gulp- 50, 60, etc. And we think we are fighting family, age, depression, our boss, our wrinkles, and our lot in life…. But if we will but stop and realize that you could be on that you could be on the brink of a life altering moment with God.

What would that do for our lives? Redefine the battle and discover the wealth of wisdom, courage and mission that can come out of that battle.

Now I believe that Jacob is fighting an angel here. The Bible says in several places that no man has seen God and lived to tell about it.  But there are several places where “the angel of the Lord” showed up and it was later said of the encounter “I have seen God.” It seems that to interact with God’s messenger is to wrestle with God himself.  But Jacob’s wrestling partner goes unnamed here, I believe to emphasize that whatever angel was representing him… this battle was between Jacob and the Almighty.

Here is one of the most interesting things in the passage for me… when the angel says: you have striven with God and with men and have prevailed.

To me it is clear from the text that Jacob didn’t “prevail” in the wrestling match in the sense that he defeated God. They wrestled all through the night and it appeared that it was going to be a draw until God dislocates Jacob’s hip with a simple touch. So just how close was the match… actually.

It was as if God allowed Jacob to take his best shot and then showed who was still in control all along with a single touch. That night Jacob found out that he couldn’t push God around and do things the way he’d always done them before.

Here is a tip we can take from Jacob during our watershed moments. When he realized it was an angel he is wrestling with, he says he will not let go until the angel blesses him. The principle we have to learn is this… if you get into a wrestling match with God: Don’t let go until He blesses you.

Have you ever heard of the term: Persistent Prayer? It doesn’t mean you have to nag God for him to answer… He IS willing to freely give us all things. It is taking the time to wrestle with God for the blessing we need rather than the one we might want.

We are changed when we prevail in prayer. When we come to the place where we say: “I’m not giving up… until these circumstances are turned into blessing.”

What battle are you currently fighting?  Could it be God you are locked in combat with?  How long do you intend to hang on?