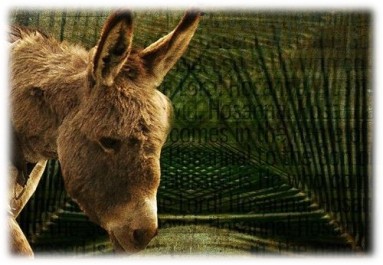 All three Synoptic Gospels (Matthew, Mark and Luke) make the point that the donkey Jesus chose to ride into Jerusalem was one upon which “no one had ridden” before.  Now I’ve never broken in such an animal before… but I have heard that sitting upon a donkey or horse that has never taken a rider can be “quite the experience.”   One would quickly find themselves launched into the air… praying gravity is kind in its choice of your landing spot. And yet with Jesus, this colt of a donkey upon which He rides is quiet, obedient, and responses easily to His commands.   Very un-donkey-like if you ask me!  It displays the nobility of a majestic white steed without any of the pride. There were a lot of reactions to Jesus’ entry into Jerusalem that day:

The Crowds:  They spread their cloaks in the road, and shouted “Hosanna!”

The Disciples:  John 12:16 says indicates that they were puzzled by the whole spectacle.

The Pharisees:   They were tearing their hair out!  They cried:  “Look how the whole world has gone after him!” (John 12:19)

There seems to be (besides Jesus) only one person calm in this entire account.  Serving in a steadfast and gentile manner is the donkey. There have been times in which I have read this passage and pictured myself in the crowd with the palm branches.   My hosanna ringing louder than my neighbors!  But this is the same crowd that would turn on Jesus at the end of the week.  I certainly don’t want to be like them. I don’t want be dumbstruck like the disciples or a curiosity seeker like others that day or be stubborn and angry like the Pharisees… so if I have to put myself in the story.  Let me be the donkey.  He is the model of Christian servant-hood and leadership here. We could learn a lot from this donkey.

As pastors and a Christian leaders it is imperative that we do.  In an essay entitled “Becoming a Leader of No Reputation,” Scott Rodin wrote of his convictions about leadership after serving for several years as a seminary president: If I could put one Bible verse on the desk of every pastor and every Christian leader in the world, it would be this, ‘If we say that we have no sin, we deceive ourselves and the truth is not in us.’ (1 John 1:8) As Christian leaders we must be engaged in a constant process of self-evaluation and repentance. It is so easy for us to be tempted in a variety of directions, and when we stray, we impact our entire ministry. Good leaders undertake their work with a deep humility and a keen awareness of their own weakness and shortcomings.  (Quoted by Crawford Loritts, Jr. in Leadership as Identity, p. 57.)

As Christian leaders, Pastors, Elders, Deacons, etc. bear a tremendous load.  And they are called to bear it with dignity and grace.  They must also be steadfast and yet not falter… never losing sight of their goal and mission. And added to all these things… humility is paramount!

Corrie ten Boom was once asked how she was able to maintain her humility after becoming such a sought after speaker.  Her reply was, “When Jesus rode into Jerusalem on Palm Sunday on the back of a donkey, and everyone was waving palm branches and throwing garments on the road, and singing praises, do you think that for one moment it ever entered the head of the donkey that any of that was for him?  If I can be the donkey on which Jesus Christ rides… I will give Him all the praise and all the honor.”