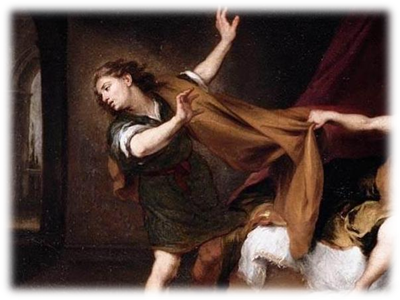 I’m telling you right now what to do.  But its something that you can’t do in the heat of the moment.  You must do it NOW… and not wait until THEN.

Stop pretending that this world will never be able to seduce someone as spiritually adept as you.  If you are still breathing… lust will continue to be one of the 7 deadlies Satan will use in his attempt to bring you down.

Take Joseph.  He was a young attractive, junior executive for Potiphar enterprises.  He is quietly and effectively minding his boss’s business when he becomes the target of the CEO’s wife!  “Lie with me.” She commanded.

Yet Joseph was able to escape her clutches.  How?  Because he was prepared for it!  Here is was his plan.

1.  He knew his character ahead of time!  Joseph knew who he was as a person.  He was a faithful person.

He was faithful to Potiphar.  He tells the wife:  “There is no one greater in this house than I, and [Potiphar] has withheld nothing from me except you, because you are his wife.  How then could I do this great evil…?” (v. 9)  The consequences of sexual sin (sex outside of marriage, adultery or porn) affect more than just oneself.  They affect the lives of loved ones with cuts too deep to ever heal properly.  And Joseph’s faithfulness to his master had been a witness to Potiphar.  Why would he chuck all of the capital he had accumulated for a quick fling?

Also, Joseph was also faithful to his God.  I mean, Joseph could have given in and Potiphar might have never found out!  (Unlikely… yet possible).  But to Joseph that didn’t matter.  God would have known.  That is why Joseph exclaims:  “How then could I do this great evil and sin against God?”  Not against Potipher… Against God!

Are you a faithful person… to others and to God?  Be faithful with your sexuality as well.

2.  He Knew This Kind of Battle was a Daily One.  Note that Joseph was propositioned by Mrs. Potiphar… daily.  (v. 10)  He could not avoid her frequent advances.  He was a slave after all.  It wasn’t like he could quit his job!

It is the same for you.  You cannot 100% avoid the bombardment of sexual images in our culture today.  When you get up in the morning you better be prepared to fight!

I particularly want to reach out to those who are married.  Never EVER let your guard down.  I read years ago the words of a famous Christian author that had given into an affair.  The year before it happened he had been asked by a friend where he thought Satan could attack him.  Was he weak in any area?  He wasn’t sure how to answer, but he told his friend that he knew for sure where Satan couldn’t attack him… in his marriage.  He had a strong one.

This author went on to warn his readers:  “Satan will often attack your strong side, because it is the least defended.”

“Now it happened one day that he went into the house to do his work, and none of the men of the household was there inside.  She caught him by his garment, saying, “Lie with me!”  And he left his garment in her hand and fled, and went outside.” (v. 11- 12)

When Paul wrote to the Corinthians and told them to “flee sexual immorality” (1 Cor. 6:18) I wonder if it was Joseph’s story that was in the back of his mind.  Likewise Paul wrote to Timothy and told him to “flee youthful lusts.” (2 Tim. 2:22)  He, like Joseph, knew that when all else fails… you better have an exit strategy!

Know this… He who made you is working to complete you one day in Christ Jesus.  If you have fallen it is not too late to pick yourself up and dust yourself off and then continue on developing His character in your life.

And remember… when all else fails… you can always run!