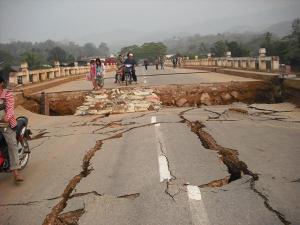 Psalm 12:1 – “Help Lord, for no one is faithful anymore; those who are loyal have vanished from the human race.”

2 Timothy 2:13 – “If we are faithless, He remains faithful, for He cannot deny Himself.”

Paul says that “God is faithful, through whom you were called into fellowship with His Son, Jesus Christ our Lord.” (Romans 3:3)  One of the names for Jesus is “the faithful.” (Revelation 3:14).  It is amazing that God remains so faithful to us… when the quality of our faithfulness is often so lacking.

Case in point, the rubble we sometime find our lives in.  We know things run smoother when we stay in the Word, pray and have fellowship with other believers… but we don’t always stick to the plan.  And in the aftermath of selfish choices, the ground beneath us starts to quake.  And we are buried by an avalanche of consequences and yet… still.. God seeks us out and desires to put us on solid ground. (Psalm 40:1-3)

It was the faithfulness of God that caused Him to search for us in the first place.  He the shepherd faithfully searched for the missing lamb, the woman faithfully seeking the missing coin… and gracious Father joyfully welcoming the lost son home.  (Luke 15)

Randy Alcorn, in his book If God is Good, shared this story of a faithful father:

“In 1988, an Armenian earthquake killed forty-five thousand.  In the chaos one man made his way to his son’s school, only to find nothing but rubble.  Other parents stumbled around dazed and weeping, calling out their children’s names.  But this father ran to the back corner of the building where his son’s classroom once was, and began digging.

To everyone else, it seemed hopeless.  How could his son have survived?  But this father had promised he would always be there for his boy, so he heaved rocks and dug, calling for his son by name:  “Armand!”

Well-meaning parents and bystanders tried to pull him out of the rubble.  “It’s too late!”  “They’re dead!”  “There’s nothing you can do!”  The fire chief tried to pull him away saying, “Fires and explosions are happening everywhere.  You’re in danger.  Go home!”  Finally, the police came and said, “You’re in shock.  You’re endangering others.  Go home.  We’ll handle it!”

But the man continued to dig, hour after hour—eight hours, then twelve, twenty-four, thirty six hours.  Finally, in the thirty-eighth hour of digging—a day and a half after everyone told him to give up hope—he called his son’s name again, pulled back a big rock, and heard his son’s voice.

From under the rocks came the words, “Dad?  I told them!  I told the other kids that if you were still alive, you’d save me!”

The father helped his son and thirteen other children climb out of the rubble.  When the building had collapsed, the children survived in a tentlike pocket.  The father lovingly carried his son home to his mother.  When the townspeople praised Armand’s father for saving the children, he simply explained, “I promised my son, ‘No matter what, I’ll be there for you!”  (If God is Good, pp. 89-90.)

God is more faithful than even this very human father.  We often bring the house down upon ourselves… but even then He seeks to clear the rubble.

Praise Him that he never gives up on you.  He has a plan for you and is faithful to carry it out in your life.  Seek to model His faithfulness…  Say to your spouse, kids and to your neighbor… “No matter what, I’ll be there for you!”  Bring this quality back to the human race!