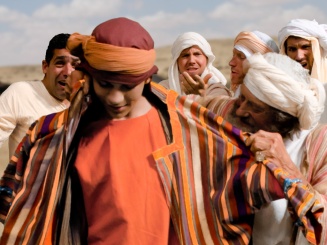 Peter Marshall… chaplain to the US Senate in the 40’s once preached about the faithfulness of God and made the following statement:

No one yet has ever set out to test God’s promises fairly, thoroughly, and humbly, and had to report that God’s promises don’t work. On the contrary, given a fair opportunity, God always surprises and overwhelms those who truly seek, with His bounty and His power.

Marshall’s words cannot be illustrated with a clearer example than the biography in which we are about recount.   The story of Joseph is a story for the ages. Whether remembered as a child on a flannel graph board in Sunday School… or as an adult while enjoying the musical Joseph and the Amazing Technicolored Dream Coat. His story touches and fascinates us. He is a man that was tested to the absolute max… and exercising faithfulness he caught a glimpse of the absolute faithfulness of God.

Now Joseph’s story is often described as a “rags to riches” story… it is actually a “riches to rags to riches” story. Although things go south for him rather quickly in this chapter… his story begins with him in a relatively good place. He was a son of a prosperous man… and also had the good fortune of the father’s favorite.  In fact father Jacob gives Joseph a special coat. The NIV calls it a “richly ornamented robe…” The NASB calls it “a varicolored tunic.” We remember its as being called the “coat of many colors.”  What we might not know is that this coat meant that Joseph was in a privileged class. The fact that it had long sleeves would make him exempt from participating in menial farming tasks.  This did not sit well with his brothers.

Beyond that, he appears to have the favor of his heavenly Father. God spoke to him in dreams. And in those dreams images of grain sheaves and dazzling stars bowing in honor to him, made it clear to Joseph that his life would matter. Even his father and brothers would one day honor him.

As we look at Joseph’s life over these next few weeks I challenge you to look at what God has caused you to dream about. What is in your heart and head that is to wonderful to tell? What has God called you to?

Let me give you a warning, however.  There are forces at work that would prefer you stop your dreaming and take your place in the throngs of faithless humanity. Joseph’s brothers jeered: “Bow down to you, you little pipsqueak? Not in this lifetime!” “Let’s get rid of this dreamer and see what becomes of his dreams!”  By the end of this chapter they at first desire to kill him… and then seek to prophet from his demise by selling him instead.

If YOU dare to dream you will not often be met with enthusiasm. More often you will face condescension, laughter, a dose of cold water or even animosity.

And yet, God calls you to dream His dreams…in full technicolor. And He wants to paint with your life a portrait of His love and His faithfulness.   But how does a disciple cooperate with the dream giver? How does one learn to dream God-sized dreams?

Joseph in the next few weeks will learn some important lessons that will move him towards his dreams:

He will learn the lessons that only comes through hardship.

He will learn to trust when all evidence of hope is gone.

He will learn to forgive when he would rather forget.

He will learn to lead men and yet stay humble to his roots.

But these lessons will take time. And it is his attitude along the way that make all the difference and help him reach his goal.  Perseverance will not be something optional for his path to his dream.

James S. Hewett shared the following story in his book Illustrations Unlimited:  “Years ago a young black child was growing up in Cleveland, in a home which he later described as “materially poor but spiritually rich.”

One day a famous athlete, Charlie Paddock, came to his school to speak to the students. At the time Paddock was considered “the fastest human being alive.” He told the children, “Listen! What do you want to be? You name it and then believe that God will help you be it.” That little boy decided that he too wanted to be the fastest human being on earth. The boy went to his track coach and told him of his new dream. His coach told him, “It’s great to have a dream, but to attain your dream you must build a ladder to it. Here is the ladder to our dreams. The first rung is determination! And the second rung is dedication. The third rung is discipline! And the fourth rung is attitude!

The result of all that motivation is that he went on to win four gold medals in the 1936 Olympic and World records for the 200 meter. His broad jump record lasted for twenty-four years. His name? Jesse Owens.  (Illustrations Unlimited, pp. 26-27.)

Dream the dreams that God has for you!  Others may try to silence them… but He who has called you will not disappoint.