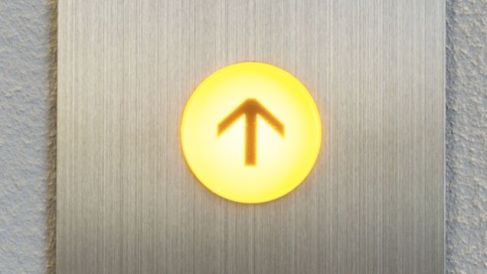 In chapter 41 Joseph goes from slopping swill for the inmates in prison to crowds parting to make way for his chariot.  Was there ever such a sudden elevation in all of history?

“So Pharaoh said to Joseph, ‘I hereby put you in charge of the whole land of Egypt.’  Then Pharaoh took his signet ring from his finger and put it on Joseph’s finger. He dressed him in robes of fine linen and put a gold chain around his neck.” (Genesis 41:41-42)

What do you do when you are suddenly on top after being on the bottom for so long?  Here is some Elevator Etiquette from the Life of Joseph:

I once took a ride on a coaster called The Volcano.  It was a VERY quick assent.  During that Volcano ride – it was hard to maintain my perspective… Am I up? Am I down? Rapid promotion can do that to you… you become disoriented.   Imagine how Joseph must have felt!

Pharaoh said to Joseph, ‘I had a dream, and no one can interpret it. But I have heard it said of you that when you hear a dream you can interpret it.  ‘I cannot do it,’ Joseph relied to Pharaoh, ‘but God will give Pharaoh the answer He desires.'”  (Genesis 41:15-16)

Joseph exuded confidence that the God who was with him in prison would also be with him on this “all important job interview!”  He didn’t need to wring his hands in worry… or fear that he would say the wrong thing… He could be confident… because his confidence wasn’t in himself

There was an old radio commercial I remember where a CEO shouted:  “I don’t want any YES MEN in my organization.”  To which his staff responded:  “YES SIR!”   Most organizations are actually FULL of “yes men”… parroting back what their bosses desire to hear.   If you begin to reach the top you will get this feeling that you don’t want to leave your perch.  Maybe you’ll just down play the bad news and feast on the good for a while! Not so with Joseph. Look at his interpretation of Pharaoh’s dream:

Do shortcut your integrity… even if what you have to say might not be pleasant to some ears.  As author Dr. Henry Cloud is fond of saying:  “Reality is your friend.”

It is helpful to remember this on your elevator ride to the top: Wealth isn’t yours to squander; and you may need some of that wealth tomorrow.  Joseph lived by these principles.

Joseph was thirty years old when he entered the service of Pharaoh king of Egypt. And Joseph went out from Pharaoh’s presence and traveled throughout Egypt.  During the seven years of abundance the land produced plentifully.  Joseph collected all the food produced in those seven years of abundance in Egypt and stored it in the cities. In each city he put the food grown in the fields surrounding it.  Joseph stored up huge quantities of grain, like the sand of the sea; it was so much that he stopped keeping records because it was beyond measure.  (Genesis 41:46-49)

Joseph’s plan to store up in the prosperous years so that they might survive the lean ones… is still a good one. Now matter how golden we imagine our futures… we can only see so far. Being prepared is a Biblically sound idea!

With all the perks that came with Joseph’s new job, he never forgot that first and foremost in his job description was to be a blessing to the world.

I was so moved when I heard the following story in  Skip Heitzig’s book,  Jesus Up Close.  He told the story about a man named Josh who was sailing down a Chicago neighborhood street in his two-month-old, 12-cylinder Jaguar XKE when  a brick sailed through the air and struck its shiny, black passenger door. Brakes slammed, gears ground into reverse, and tires spun the Jaguar back to the spot from which the missile had been launched. The young executive jumped out, grabbed the kid, and pushed him against a fender. “That’s my new Jag,” he shouted. “That brick you threw is gonna cost you lots of money!” “I’m sorry, mister! No one would stop! I didn’t know what else to do,” the youngster sobbed, pointing. “It’s my brother. He rolled off the curb, fell out of his wheelchair, and is hurt. He’s too heavy for me. Please, help me lift him back.” Josh’s head of steam evaporated. Straining, he lifted the boy’s brother into the wheelchair, wiped the scrapes and cuts with his handkerchief, and checked to see that there was no serious injury. He then watched the younger brother push the wheelchair down the sidewalk toward their home. Josh never did fix his door. He kept the dent to remind himself not to go through life so fast that someone would have to throw a brick to get his attention.”  (Skip Heitzig)

Okay… so the elevator doors are opening.  Let me hold the door for you.  “Going Up?” I ask.  Somewhat embarrassed you respond:  “Yes…” Great!  But just remember… don’t let your success destroy your humble confidence… or let it tear at your desire to speak up for the truth… or let it stop your from displaying good money management skills… or… above all this… I say this to you as you enter the threshold… don’t let it keep you from blessing others!

Rise up and bless the world. That is your calling!