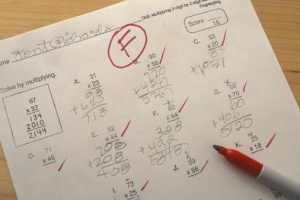 We all know the results of unfinished assignments.  In the class room if we don’t complete our assignment… we get an “f” or and “incomplete.”  In football, if we are playing defense we need to stay with our assignment or the opponents will score an easy 6 points.  In our daily life, if we don’t complete our paperwork properly (for our taxes, our car tags, etc.) we get to do them over again… hopefully without taxes and penalties.  We know there is sometimes a price to pay… and yet we still procrastinate.

In our passage today, Paul has been talking to the elders at the church in Ephesus.  He tells them that his future involves hard times and jail time (v. 23) and that he will likely not see them face to face again.  (v. 25)  But rather than try to side step what is to come… he embraces it.  To Paul it is a continuation and a fitting conclusion to the ministry given to him directly by Jesus.

22 And now, behold, bound by the Spirit, I am on my way to Jerusalem, not knowing what will happen to me there, 23 except that the Holy Spirit solemnly testifies to me in every city, saying that bonds and afflictions await me. 24 But I do not consider my life of any account as dear to myself, so that I may finish my course and the ministry which I received from the Lord Jesus, to testify solemnly of the gospel of the grace of God.

I find fascinating the part where Paul says:  “I do not consider my life of any account as dear to myself.”  This kind of flies in the face of the self esteem cult in our country.  How could Paul say that he was of no consequence?

I don’t think that Paul felt badly about himself or that he didn’t feel he had contributed significantly to the advancement of the Kingdom.  I think he meant two things:

1)  The Message was more important than the Messenger.

I picked up a book from the free bin at my favorite bookstore the other day.  It was from the 1920’s.  In Dale Carnegie’s book “Public Speaking and the Influencing of Business Men” I found this jewel regarding having confidence when you speak:  “Have a message, and then think of yourself as a Western Union boy instructed to deliver it.  We pay little attention to the boy.  It is the telegram that we want.  The message—that is the thing.  Keep your mind on it.  Know it like the back of your hand.  Believe it feelingly.  Then talk as if you were determined to say it.”

2)  It is more about the WE mission, and less about the ME mission.

I recently read the story of Second Lieutenant Karl Marlantes, who, at the age of 23 was in charge of 40 marines during an intense battle in the Vietnam War.  Marlantes and his men were in the jungle waiting to retake a hill the enemy possessed after U.S. jets bombed it. The jets then came and bombed the wrong hill. This left Marlantes and his men without cover and vulnerable.  It would only take a minutes before enemy rockets and mortars would find his troops.

Marlantes knew what he had to do next. He writes:

“If I didn’t get up and lead, we’d get wiped out …. I did a lot of things that day … but the one I’m most proud of is that I simply stood up, in the middle of that flying metal, and started up the hill …. I simply ran forward up the steep hill, zigzagging for the bunker, all by myself, hoping [my own soldiers] wouldn’t hit me in the back. It’s hard to zigzag while running uphill loaded down with ammunition and grenades.”

Then out of the corner of his eye, he saw something moving.   He continued by writing:

“It was a marine! He was about 15 meters below me, zigzagging, falling, up and running again. Immediately behind him a long ragged line of Marines came moving and weaving up the hill behind me. Behind the line were spots of crumpled bodies, lying where they’d been hit. They’d all come with me …. Everyone was intermingled, weaving, rushing and covering, taking on each hole and bunker one at a time in groups …. We, the group, just rushed forward all at once. We couldn’t be stopped. Just individuals among us were stopped … but we couldn’t be …. I was we, no longer me.  (Stewart Ruch, Wheaton, Illinois; source: Karl Marlantes, “The Truth About Being a Hero,” The Wall Street Journal (8-20-11)

You know you have a good church is when it stops being about the “me”…. and starts to be about the “we”.

Finish the course and ministry assigned to you by Jesus.  There is no better way to leave a legacy!